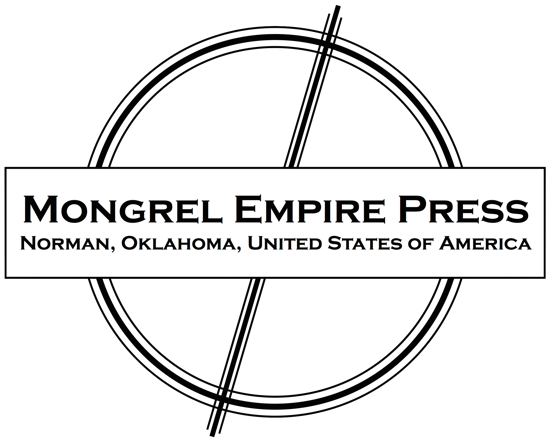 Mongrel Empire Press was established in 2007 with a mission to publish well-written, thoughtfully-considered works across generic and disciplinary boundaries.

Mongrel Empire Press recognizes that the mongrel of the species is the one with the best survival skills and that ecological diversity is necessary to a healthy planet. Yet, we also experience that “cross-disciplinary” and “multi-cultural” are terms frequently talked about but rarely practiced in their broadest sense.  We will honor our commitment to the mongrel empire by publishing the best work we can find—no matter the genre, the discipline, or the author’s biography. We are particularly interested in works that, because of their mixed generic, disciplinary, and philosophical approaches, cannot find a home at other presses which have a more narrowly defined mission.

Mongrel Empire Press chose its moniker because it celebrates the place—Oklahoma—where the press resides. Oklahoma and Oklahomans are glorious admixtures: the land, the flora and fauna (as evidenced by the Crosstimbers), and the people are advantageously heterogenous. Our mongrel nation is not perfect, but we believe that its myriad possibilities point the way to a sustainable and humane future. We will honor our commitment to Oklahoma by actively searching out great writing by Oklahomans.